Cookie preferences
This website uses cookies, which are necessary for the technical operation of the website and are always set. Other cookies, which increase the comfort when using this website, are used for direct advertising or to facilitate interaction with other websites and social networks, are only set with your consent.
Configuration
Technically required
These cookies are necessary for the basic functions of the shop.
Allow all cookies
CSRF token
Cookie preferences
Currency change
Customer recognition
Customer-specific caching
Decline all cookies
Individual prices
Selected shop
Session
Comfort functions
These cookies are used to make the shopping experience even more appealing, for example for the recognition of the visitor.
Note
Statistics & Tracking
Affiliate program
Track device being used
Categories 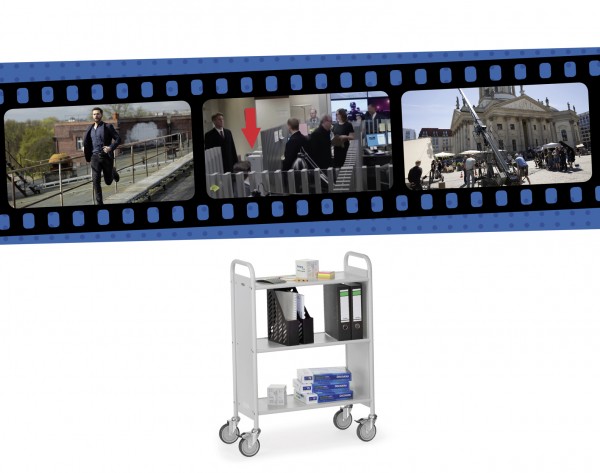 Does the CIA office in Berlin have a mole? This is the suspicion that an American agent pursues, investigating in the world of international secret services. Always present in the background: transport equipment from fetra. The trolleys and carts are part of the setting for the political thriller “Berlin Station” featured on American Pay-TV in 2016 and later on Netflix in Germany. And behind the scenes, too, the products of the German manufacturer from Borgholzhausen proved to be valuable helpers.

In three seasons of ten episodes each, viewers immerse themselves into the world of political plotting. “Berlin Station” revolves around CIA agent Daniel Miller, played by British actor Richard Armitage, who is searching for a leak at the German branch of the American secret service – and repeatedly finds himself in dicey situations. The cast also includes top-class German artists such as Heino Ferch, Natalia Wörner and Mina Tander. Apart from Berlin and Budapest, the series was shot on the Spanish mainland, in Austria and in Norway.

“The individual seasons each follow a specific narrative and are set in daily political events”, says Marc-André Gerke, Assistant Production Coordinator of Filmservice Babelsberg GmbH, which produced “Berlin Station”. Everything revolves around the CIA headquarters in Berlin, where the fetra transport devices have their big appearance. As part of the office furnishings, they contribute to the authenticity of the scenery. Yet, they don’t just serve as decoration. “The series often features extras and actors who, for example, push a fetra trolley with documents through the CIA station”, explains Marc-André Gerke.

Strong behind the scenes too

“Our office trolleys and push-bar carts with their light grey colour fit perfectly into the modern ambience of the espionage headquarters in the series”, says fetra Marketing Manager Jan Völlering, who organised the rental of a total of eleven devices. They have been part of the set since the first season – and not only came in handy as props. “We used the hand trucks and storeroom trolleys from fetra in the warehouse of our set design department for loading and transporting all sorts of items”, says Marc-André Gerke. “For our team, they were a great help in their daily transport work.”

Leaders in functionality and Looks

In their search for suitable props, the set design department of the film production company soon came across the fetra products. The aim was to find office trolleys that would blend perfectly into the surroundings and make the setting appear as realistic as possible. And also in terms of functionality and durability, the devices had to be strong to ensure they would not have to be replaced during the planned production period of five years due to any defects. “Since the fetra transport devices are leaders in their class both in terms of looks and functionality, they were perfect for our purposes”, adds Marc-André Gehrke, highly satisfied.